Remember our previous post on Tao's at PoMo? Well, Tao's have shifted to a new location which is at The Central. Actually, the branch at The Central was called Zero Zero which had the same concept as Tao's but was more upscale and towards fine dining. However, after much considerations, they decided to shift Tao's to The Central to replace Zero Zero.

The concept of Tao's is retained. It still holds the "One Price, One Menu, Many Selections" philosophy. 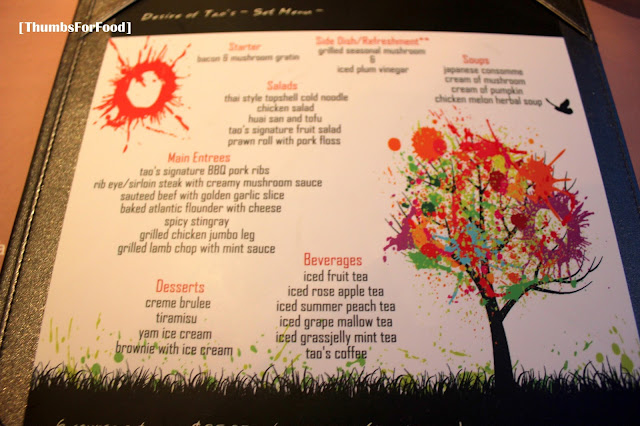 The Tao's at The Central seems more well-furbished and more spacious compared to the one at PoMo. However, we were quite surprised to find out that the crowd was not as large as when it was at PoMo. Perhaps, not many people has found out of its location at The Central yet. Even though the ambience is much better now, the prices are retained.

The difference between the set lunch and set menu is basically the addition of the side dish and refreshment. One of which is the one show below -  Iced Plum Vinegar. It is refreshing and I guess the taste of it did not differ much.

Their starter is the Bacon and Mushroom Gratin served with white, heated bread. This is what I have been looking forward to when I first knew we were going to Tao's. The cheese and bacon goes so well with the bread that you it's difficult to hold back the urge to order more bread to go with it. Glad that the taste of it did not change!

For salads, our favorites are Thai Style Topshell Cold Noodle and  Huai San and Tofu. You can compare the food photos with the one we posted when we were at PoMo.

The Thai Style Topshell with cold noodle came in a prettier bowl than before. We all felt that it was tasty. But, in terms of flavor, there was just something different than before. Perhaps the sauce was made differently? We couldn't really figure out. But, well, still one of our favorite salad there.

Huai San and Tofu was about the same as before. I would have appreciated a bit more huai san sticks because it's really nice and thus sad to have just two sticks. The tofu and sauce placed in this cup was a bit difficult to reach. And the sauce was quite little. So, probably a change in bowl and more sauce would be easier for the huai san to be dipped into the sauce.

Iced Rose Apple Tea is our favorite. But, like we said in the earlier post no harm trying other flavored teas because they all taste nice. We felt that the apple flavor in our tea could be stronger. Other than that, not much to pick about the tea!
Side Dish, Grilled Seasoned Mushroom was nothing much to rave about but we definitely welcome this addition to our meal!

Strange huh? I realized the sequence of photos is the same as our previous post. Seriously, pure coincidence!

Okay, next up Cream of Mushroom. Yes, we're biased towards this soup choice. Since, you've heard our rave in the previous post, I shall share with you the others. We've actually tasted the Japanese Consomme before it is la light-flavored soup that has a tinge of fish flavor to it. Kind of like the teapot soup you drink in Japanese restaurants. The Chicken Melon Herbal Soup was also not bad. I think those who like the traditional Chinese kind of herbal soup would like this. Nothing extraordinary but, not a bad choice either!

Main course -- Sirloin Steak with brown mushroom sauce. Not a surprising choice. We just love our steak. Well, the waiter there would recommend the pork ribs which we have tasted before. If placed side by side with the Sirloin, we would pick the Sirloin because we don't really favor pork ribs.

Okay, the two dishes below are NEW in the menu! It's not on the official menu but, the waiter there would introduce you to try them out.

Baked Salmon is one of the dishes. It comes served with mash sweet potato and taro chips together with sauce to go with the fish. I would say it was average standard, nothing extraordinary. The salmon was a little overcooked which caused it to lose some of it's juiciness and oil. If it is cooked to perfection, I would say this dish would be good.

Duck Confit was their other new dish. When we heard they had duck confit we were so thrilled to try it out. If you have recommendations of extraordinary duck confit, please do drop us a comment or mail to let us know. We will be pleased to try out great duck confit. The one we had that day was alright. The duck meat is not as tender as we would like. But well, the taste wise, was okay. I guess if they could drizzle some sauce over it to add more flavor, the dish would be better?

For desserts, we ate creme brulee and tiramisu. The creme brulee looked and tasted quite the same as before. You can check out our previous post for it. As for the tiramisu, it was mediocre.

We would like to thank the waiter that day for sharing with us how Tao's came to The Central. Also, the service there is still quite awesome! We had quite a private time and all the attention to us that night as we were the only table that stayed the longest.

I would think for the ambience and choices you have, Tao's make a good  place for you to hold gatherings with friends and family. For the price, I would say the lunch would be a better deal. Also, note that they are having a promotion where you can buy a $350 nett voucher booklet and be entitled to 10 dinner sets. Note that you can only use a maximum of 5 vouchers per visit and it has a 6 months validity period. If you really like the food there, I would think it's quite a good deal! 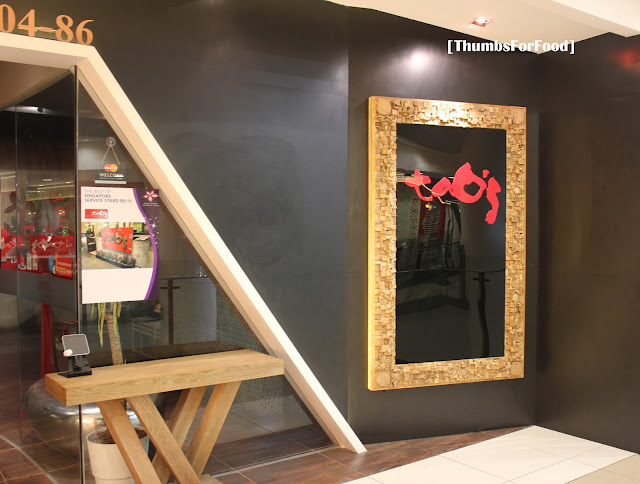 Till next time,
Y