Following the blackball craze, my tastebuds were piqued when we spotted a shop that had a similar concept in Millenia Walk.

An Affair with Ice sells Shaved Ice topped with Taiwanese Fen Yuan (Potato/Yam Starch Balls). I really like the name of the store as it captures the essence of the product.

We were there on a Wednesday night and sadly, the business was quite bleak. It was probably due to after office hours and even though it is at a Central location, it was quite hidden away amidst Suntec City and Marina Bay area.

We decided to try their Drinks Special as you can see below! Choose any Ice Cool Set and get a drink for $1. The dessert is about $4++. And as you can see below there are many flavors of ice you can choose from. They have the more common fruit flavors as well as taro and green tea. What's interesting is that they have dfferent toppings to go with it. If you like customized dessert, you can choose your own flavored ice with desired toppings! 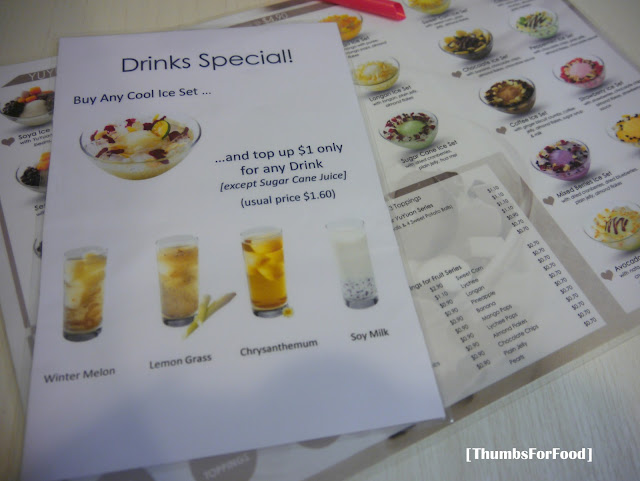 So, we tried the Taro Shaved ice topped with Red Bean and Fen Yuan. We also topped up a dollar for some lemongrass drink.

Compared with blackball, I would say that the Fen Yuan are not as nice. They are kind of hard and not chewy enough. Taste wise, it was quite mediocre. I felt that the shaved Ice and toppings could complement each other better. Creativity wise, i guess the taro shaved ice was kind of refreshing! And, we concluded that the more you eat the dessert, the better it tastes! Probably due to the flavor of the shaved ice being more cohesive with the toppings. The Lemongrass drink lacks a bit of sweetness.

Overall, the store is quite small. We noticed that they also sell cooked food like Nasi Lemak and some noodles. Probably to attract more crowd. I would say that there is definitely room for improvements on the taste. Bold creations of desserts would definitely be a hit if the taste is better! :)