In conjunction with Tiger Beer Singapore's Uncage campaign, we were invited to Labyrinth for food tasting. The uncaged personality was actually Labyrinth's founder, Chef Han Li Guang. Chef Han prepared a special 7-course dinner, of which some dishes were infused with Tiger Beer.

We were served with Tiger Beer at the start of the meal. We tried Tiger Radler as well, which we felt was like a champagne and would appear more to ladies.

The first up on the table was bread served with dip. The dip served complementing the bread was very unique. On the left hand side of the photo below is Balsamic Vinegar in the form of a jam paste, followed by Olive Powder and Espuma Garlic. I thought the Olive Powder was a bit too bland. I particularly enjoyed the Espuma Garlic as I felt it went really well with the bread.

Next up, is an Amuse Bouche. It is a bite-sized portion of food served before the meal. The one served in Labyrinth is apple flesh sitting on Apple Beer Sorbet. It is a very light start to the meal.


When we were served the Fish and Chip Beer, we were quite surprised. Where's the Fish & Chip? It was kind of hard to believe that the Martini glass in front of us was actually Fish & Chip Beer. But, yes, it was actually made of Tiger Beer Jelly on the bottom most later, followed by Cod & Potato Espuma and Crispy Garnishes.


This rendition of Fish & Chips was definitely something that we've never tasted before. It was definitely refreshing. We thought that the beer jelly really made the whole dish more refreshing. The Cod and Potato Espuma was smooth and complemented really well with Beer Jelly. Unfortunately, this dish is only available during the National Day August period. I look forward to it being placed into Labyrinth's fixed menu.


It was also a visual feast to witness Chef Han and team whipping up the various dishes in front of us. Plating was definitely an art and being able to see how much thought and care was placed into each dish was really a pleasure. 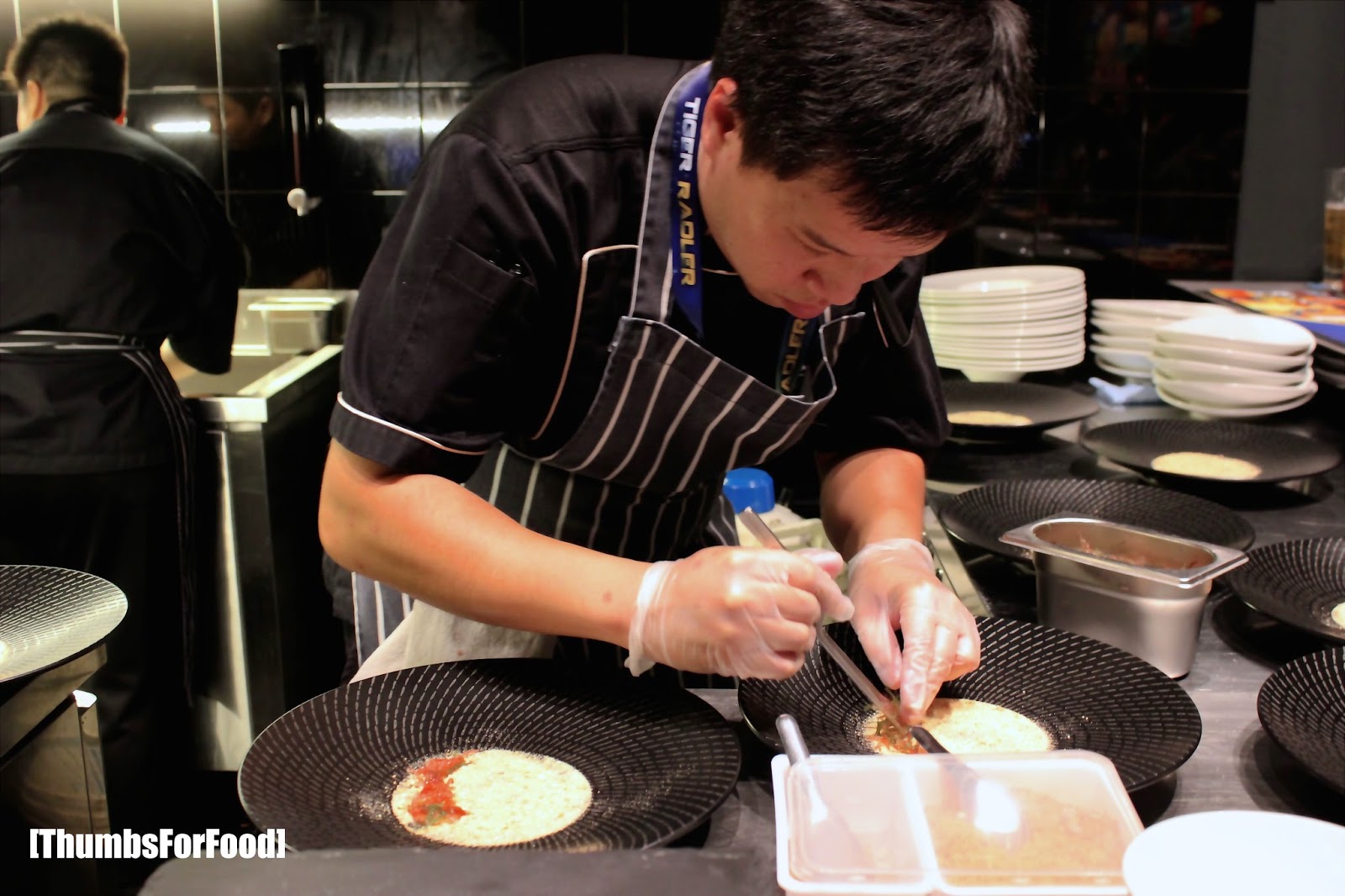 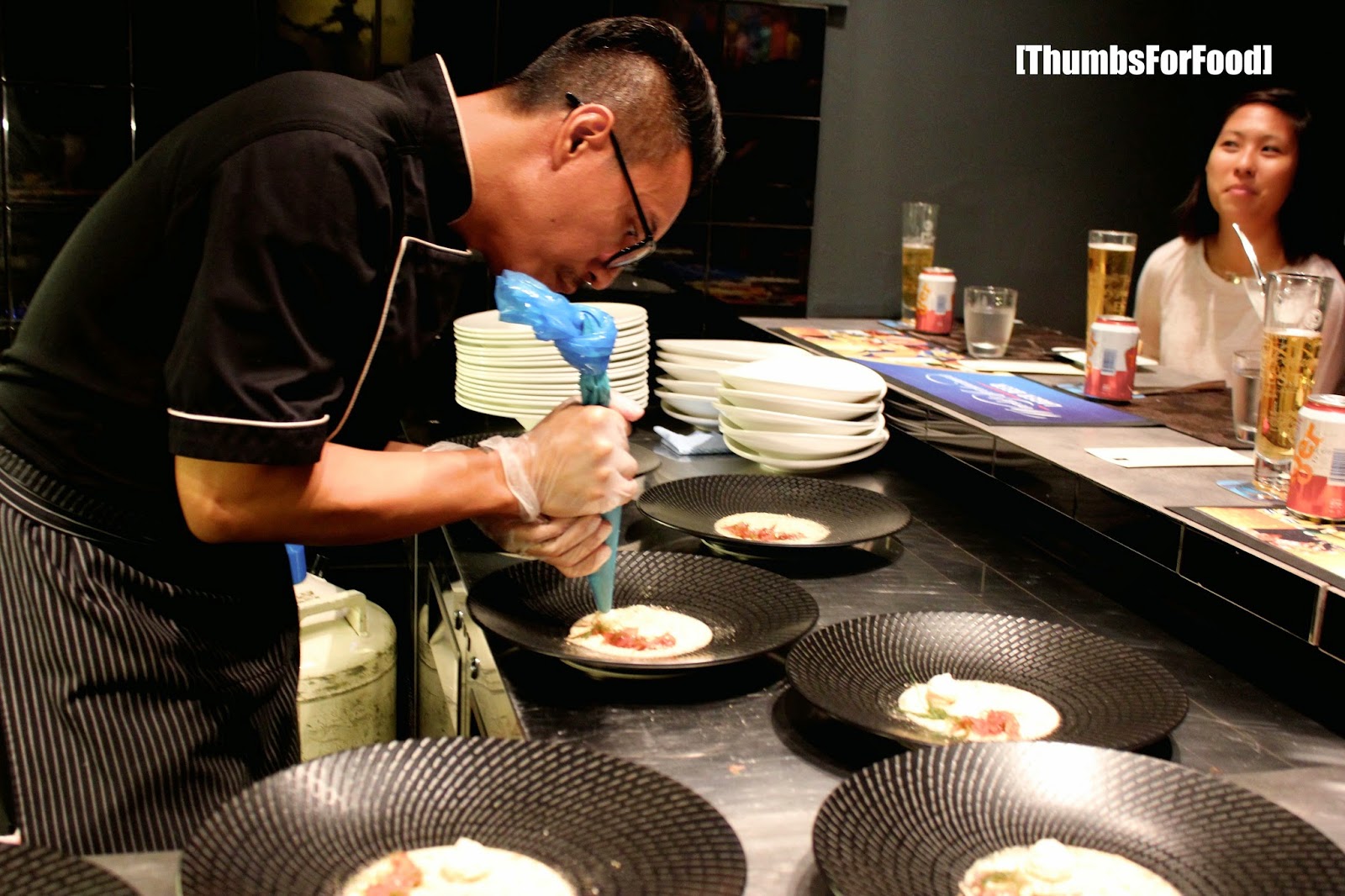 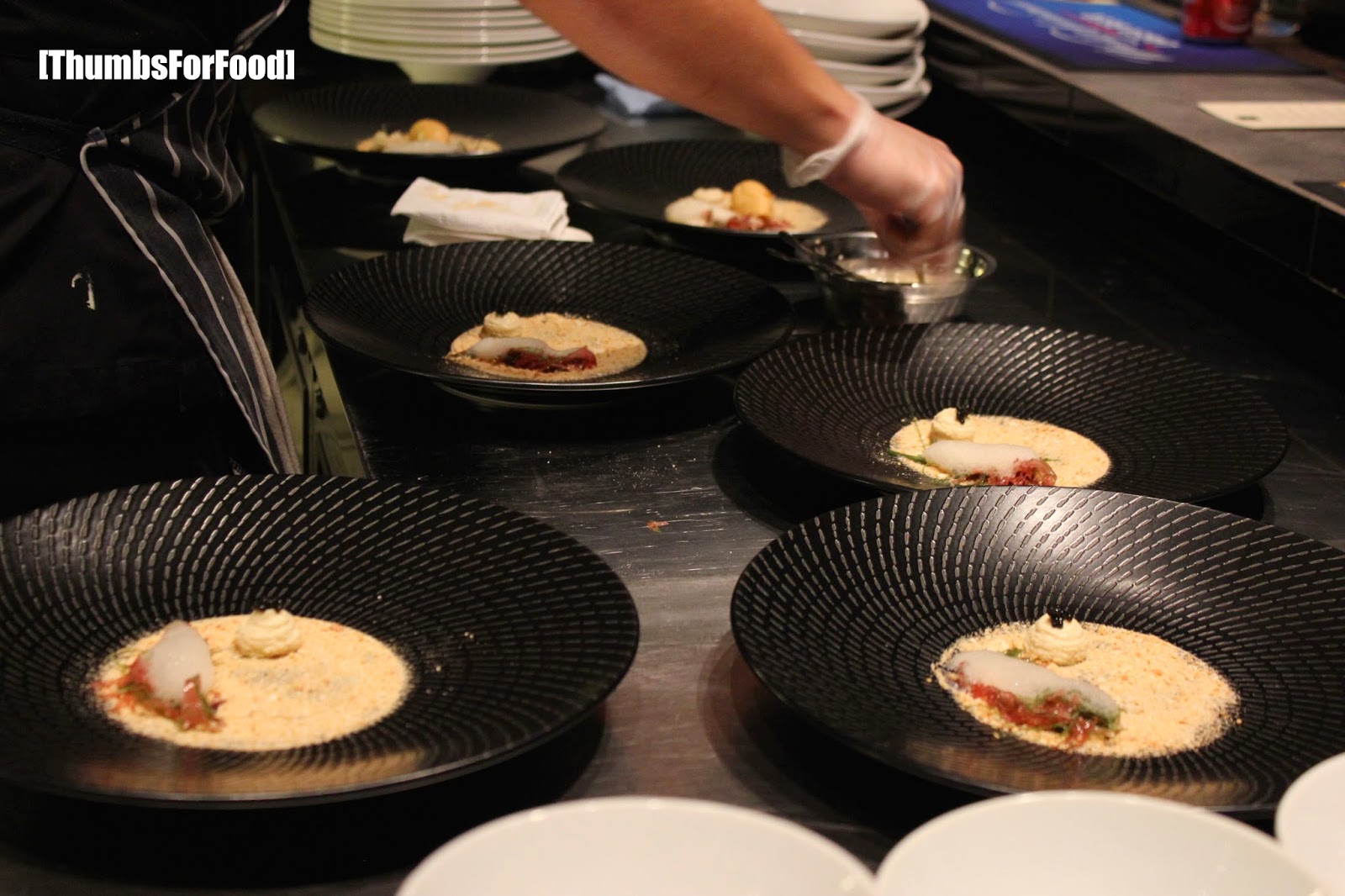 Labyrinth Chilli Crab is one of their signature dishes that can be found in their usual dinner menu. The one that we were served with on the day had a twist to it as the Soft Shell Crab was fried in Tiger Beer Batter. I was really surprised by how delicious Chili Crab Ice Cream could be. It was cold, but the taste literally exploded in the mouth. The Beer Batter Soft Shell Crab was done nicely but, I personally felt did not have much of Beer flavour. Nevertheless, this dish was outstanding in flavours.


Next on the menu, is their Main Course, Satay Steak. We felt that the portion was really generous and it was a bit too much considering that there were so many courses. The satay flavour was really quite strong and vivid. Personally, I would prefer the usual plain steak as I felt the Satay flavour became too overpowering after awhile. The Pan Seared Foie Gras and Peanut Mochi complemented really well with the steak and was consistent to the whole concept of the dish.

Radler Meringue Tart is a deconstructed dessert. It meringue is made from Tiger Radler and combined together with Lemon Curd and Tart Crumbs. I like that the dessert is light, refreshing and not too sweet. I couldn't taste the Radler though. This dish is also not on the usual menu.

Singapore Breakfast was a really interesting dessert and surprised me. The chefs placed eggs in traditional rooster bowls and started torching them. All of us were quite intrigued as to what this dessert will turn out to be like.

Well, it is actually just the egg shell on the outside but panna cotta with mango on the inside. When you break it open, it really does resemble the anatomy of the egg! And it is served with Chocolate Sauce (Served in Soy Sauce bottle) and Almond Powder (Served in Pepper Bottle). The Tarik Creme Brûlée was served alongside which resembles the traditional tea served alongside the eggs. It is a really creative dish and tastes amazing! Would definitely want to have more of this!


Overall, Labyrinth serves up unique dishes that gives local dishes a unique and impressionable twist. From the dishes that were whipped up, we could see that Chef Han took a lot of effort to fine-tune them and prepare them to ensure that they are all palatable visually and taste-wise.

Dinner is 5 courses priced at $98+, with only Service Charge and no GST. I would be back to try their famed Chendol Xiao Long Bao and other dishes.

We would like to thank Tiger Beer and Labyrinth for hosting us for this event and we truly enjoyed the dinner.

Open from Tuesday to SundayClosed on MondaysDinner | 6:30pm to 10:30pm