To learn more about the World Street Food Congress such as its history, programme line-up and e.t.c, please visit http://www.wsfcongress.com/index.aspx for more!

We were there around 6.30pm and sadly it was raining. We did not have to pay for the $8 entrance fees because we told the ticket sellers at the entrance "Patricia's Guests" and there we go... Free Entrance! More money to spend on eating!

One thing to note is to attend the event with an open and inquisitive mind. We had the expectation that we might need to spend more and most likely the portion might be small. What made us excited was really the prospect of trying something different and that made us satisfied and happy.

We proceeded to look around at the stalls. There wasn't many people probably because it was still early and  because it was raining. The stall are set up under tentages as you can see below. We took it slow and started off looking at what each and every stall sold. There were some that captured our attention while others were striked off our list of must-tries immediately.

So, we happened to chance upon someone my friend knew there. She was working in the event so we asked her what was highly recommended. Without thinking, she pointed us to Meyers Kokken from Denmark. It is all the way at a tiny inconspicuous corner of the venue. It is a venture by Chef Klaus Meyer who co-founded restaurant, Noma that was voted the best restaurant in the world for consecutive 3 years. The food stall sold its signature pork sandwich.


Both my friend and I agreed that this is definitely a must-try! It costs $14, relatively higher than the rest of the other food stalls whose food are priced below $10. But, this is sooooo delicious! It has totally succulent pork, fresh apple, cucumber, Greek yoghurt and mustard dressing. The bun is organic as well. The serving is quite huge in comparison with the other dishes we tried. My photo below doesn't justify well enough the taste of the burger. They had fried pork skin in it as well. I didn't know that a burger could be made so unique, refreshing and sumptuous.


Next up, we tried an Indonesian Street Food, Kue Pancong and Kue Pukis. A set consisting of a mixture of both costs $4.


The nice stall owner opened the lid to show us how the kueh was actually made.


We got to try the Kuehs before purchasing them. However, both of us agreed that the actual Kueh we bought was so much better tasting because it was served hot. And yes, the person would explain to you the difference of both when you ask her. Kue Pancong is made from desiccated coconut and topped with sugar while Kue Pukis is fluffy and sweet like a pancake or waflle. This dish is special and we felt that this is our second favorite dish!

Chicken 65 is one of the must tries that we read. It is said to be marinated for 65 days. But, noone can exactly say how it got it's name. 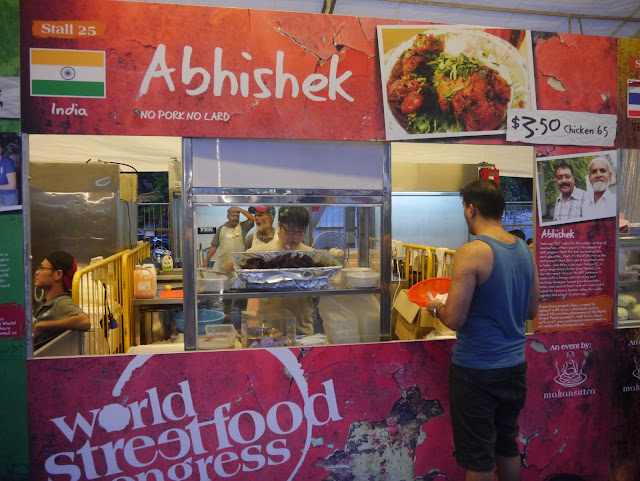 Chicken 65 is priced at $3.50. The spices of the chicken is totally aromatic. The chicken has some minty chutney taste which gives the chicken a unique yet yummy taste. I really like the sauce/paste that came with it. It's hard to finger what made it so different from the usual chicken. So, just try it for yourself!

We tried out a Vietnamese food as well. The auntie of the stall was so nice she waved to the camera when she saw I was snapping away. But yes, they sell something called Nambo Sticky Rice (Banana Sticky Rice).

The glutinous rice is first infused with coconut. Then, it is wrapped up with a banana and rolled up in banana leaves. It is then toasted over charcoal fire and topped with coconut milk and sesame sauce. I would prefer if there was less sauce though. This is like a sweet dessert and the banana with glutinous rice complemented each other really well.


Seafood Tostado was our next choice. It was sold at $10 per piece. Really, my qualm is that the serving is way too small. One chip topped with fresh seafood for $10 is really overpriced.

It is actually set up by this mother and daughter in Mexico. They do serve cocktail as well. We didn't have the guts to try really. So we opted for the Seafood Tostado. It was kind of heartwarming to see the mother-daughter pair working hand in hand to make them.

And there you go! The Seafood Tostado looks really good right? I love that they topped it with avocado. Being voted one of the world's 101 places to eat, I got to say it lived up to its name. The sauce was really tangy and refreshing and there was totally no fishy seafood taste. A totally unique and different dish on its own. 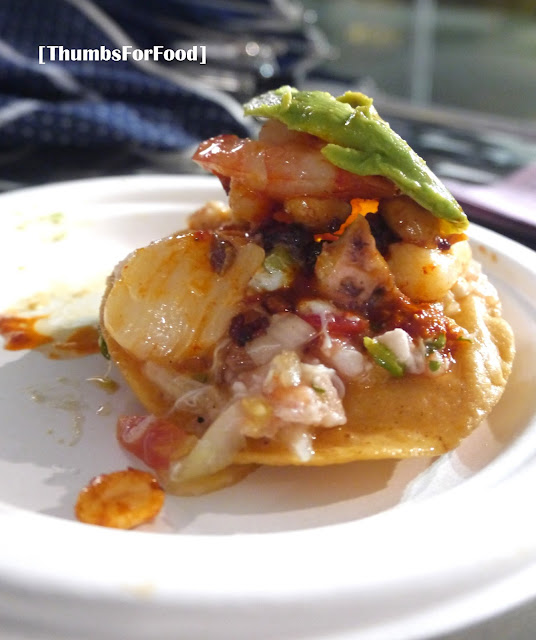 Last but not least, to spend our last $4.50, we were brave enough to try something really out of our comfort zone. We tried the Khun Pas which was the one that is coated with coconut, sugar and a bit of salt on the right of the picture. It comes in 3 different flavors but really we couldn't taste the difference. The two dumpling like things are called Khao Kriab Pak Moh. They are savoury and comes wrapped with mixed vegetable and mince pork.

I would say I prefer the dumplings like Khao Kriab Pak Moh better! Even though it's cold, the skin was not sticky and hard. Instead, it was still soft and the proportion of skin to fillings made it even more tasty and sumptuous. We love the chili that was supposed to be a dip for the dumplings.


All in all, we spend $20 per person in trying all 6 dishes from 6 different parts of the world. Well, we ordered dish by dish and ate dish by dish since we were not in the rush. We felt in this way we were able to savour the complete taste of every dish. We found our expenses reasonable for the quality of food. Generally, the food we tasted was yummy. But, don't expect to be extremely filling. I guess if you hold the mentality to try something new, then it is quite a worthwhile food trip!

The drinks were however not worth the money in my opinion. So, please bring along your own drink if possible. They have plenty sitting and standing area so not to worry. 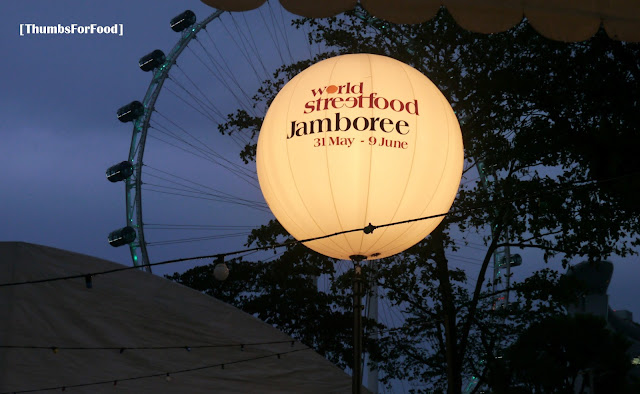 Finally, we hope you all will enjoy trying out different kinds of cuisines like we do! Do take note event is ending on 9th June and "Patricia's Guest" promotion will end on Friday!

F1 Pit Building and Paddock
1 Republic Boulevard
Nearest MRT: Promenade (Exit A)
(Look out for the white tentages and signs)