As part of The Dining Edition in Marina Square, Hamanoya opened its first outlet there. As Japanese charcoal-grill is quite a fresh concept to me, I was piqued and decided to give it a try!

Robatayaki is the more accurate to describe this concept of slow-grilled cooking of skewered food over hot charcoal. As such, when we were seated down, the waitress placed a small charcoal stove in front of us and placed two skewered squid and octopus over the seemingly non-existent "fire". She then told us that these were complimentary. Besides the happy thought of free food, I also thought that it actually was a great way to set the tone of the meal.

The complimentary Squid and Scallop skewer was really appetising with the burst of sweet and fresh scallop flavor. The squid was also succulent and delectable. The charcoal fire really brought out the aroma of seafood, making it simple yet tasty.

The Assorted Skewers platter ($12.99) is a natural choice for first-timers who would like to try a variety of their skewers. The platter includes Chicken Yakitori, Chicken Wings, Pork Belly, Beef and Grilled Chicken Ball with Egg. My favorites are the Pork Belly and the Grilled Chicken Ball. I loved the flavors of the chicken ball as it was well marinated and had a nice texture. When it is dipped into the egg, the flavors met and made it more tasty. The meat of the skewers were well-cooked, tender and juicy.

We also ordered Egg Omelette (about $8.99). What I really like about this dish that it is served hot and the Egg was cooked well, fluffy and even. The ingredients in the Egg Omelette are chicken and some vegetables. The dish was simple but is really a comfort food. The sauce and mayonnaise drizzled on top of the omelette was not too overpowering, allowing the omelette to retain it's own flavor. 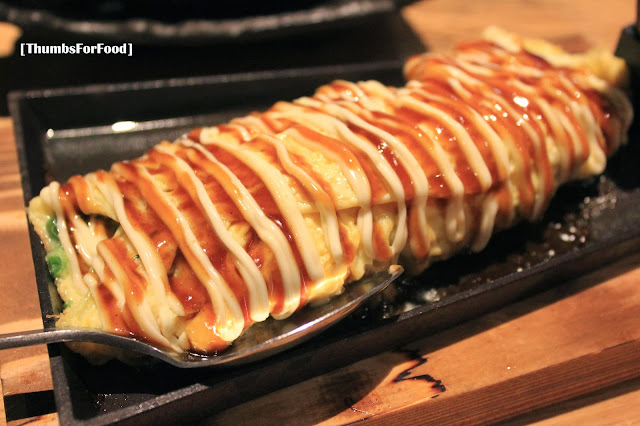 Rolled Egg (Tamago) with Mentaiko (about $6.99) was chosen because I really like egg and I really like Mentaiko! The prospect of these two favorites coming together was enough to tempt me. I ate this on my second visit there as well. But, I felt that the first time when I ate this it was better as there was more Mentaiko in the egg. The rolled egg was done perfectly both visually and texture wise.

Semi Dried Salmon with Shiokouji ($9.99) was our pick as the Salmon Belly had no more in stock! Thankfully, this salmon dish was good! I was afraid it would be too dry which may cause the salmon to lose its natural oil. I guess semi dry means the outer layer is more cooked liked seen in the picture below but, the inner layers are still kept juicy and nice. The salmon skin was also tasty and done well thanks to the grill.

What exactly is Shiokouji? Shiokouji is a Japanese live food rich in enzyme which is commonly used in place of salt as it lowers the salt content in food by 50%. In short, it makes a healthier marinade.

Semi Dried Chicken with Shiokouji ($9.99) came as a surprise. It was actually half a small chicken. I liked that the chicken was tender and juicy inside while the skin had a light crisp to it with the burn areas as you can see below. I requested for another slice of lemon as I like how the tinge of lemon flavor complemented the chicken.


Overall, I would recommend Hamanoya for those seeking a different Japanese dining experience. From what I read, this concept of Robatayaki is quite unique in Singapore and is normally priced exorbitantly. I really liked the variety of food they offer from Sashimi, to grilled food and even hotpots. For the good service, quality of food and ambience, I would say that Hamanoya is definitely worth your try!