Hello! I just thought it will be good to share with you about some of my experiences in US when I was there for my student exchange program and travel.

We took the Bart train which dropped us at the Powell Station. It was quite convenient but if you are carrying a lot of luggages and stuff, I would suggest the airport shuttle.

I have not taken any airport shuttles so far, so I am not sure how it works but the price certainly seems reasonable. Anyway, the Bart train in SF is not the same as the MUNI train. (I thought it was similar initially)

Yeah so we reached the central of SF in around 30 minutes and got out into the chilly city. We were just standing there with our luggages, trying to figure out where to go.

Note:
Don't fall into the tourist trap! There will be people loitering there, offering you directions and even maps. But, don't take them unless you are really lost!

Well, the story is this guy came to us and offered us directions and a 'free map''. I was really dubious of his intentions and as expected, he asked for money from us. Luckily, I didn't have much cash on me so I just gave him USD 2 bucks.

He's quite a funny chap.

Guy (while waiting for us to dig money out from our wallets): I know this is a strange way of earning money, but this is how I earn money.
Us: (Simply smiled at him and nodded)
Guy: This is just how I earn money ( I swear he repeated this line 9468569834 times)
Us: Mmmm I only have USD 2 .... Is it okay? (I was so afraid that he might just refuse my minimal amount)
Guy: Yeah its fine

I was so relieved that he accepted the money! Well, I should share about what caused my over-paranoia in the states one day! I am glad I grew as a traveller.

Okay so after that we dragged our stuff to Hostelling International which was really near the station (a few blocks away) I like the place. But, no photos because I forgot to take. I think I was a little too hungry at that time to remember. (On the way to the hostel, I saw like a thousand nice restaurants and I was already planning where to go for lunch!)
Hostelling International San Francisco

There were 3 HI in San Francisco so check out which location you prefer! This is the address of the one we stayed at:

The Tom Yam soup was alright. Not too spicy, more on the sour side. There were tomatoes and onions in the soup (which I think the real soup wouldn't have). On a side note, it really reminds me of my mom's Fish soup which I love. I guess, I shall just take it for that [: 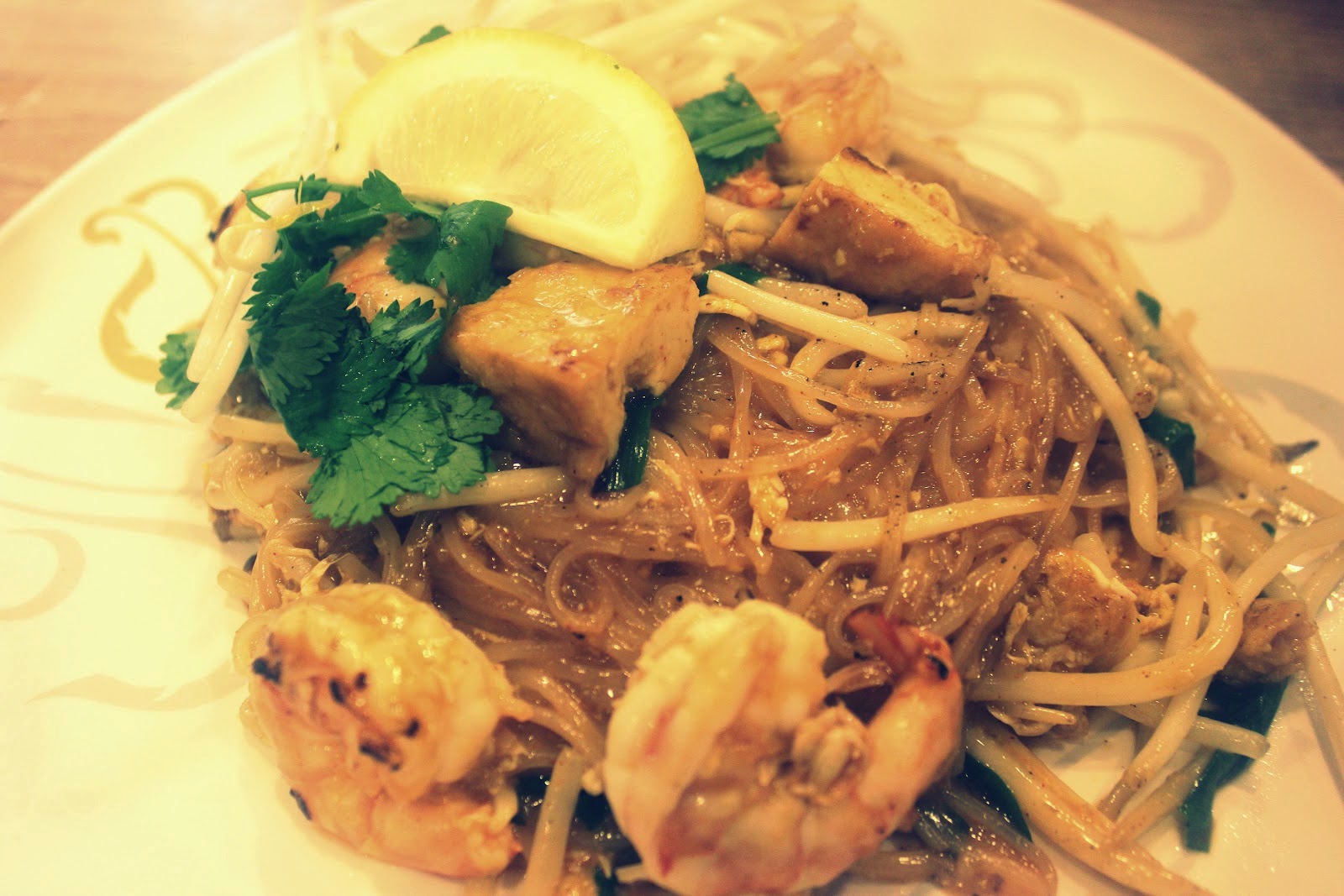 This was pretty nice, at least to my liking. Posting this picture makes me feel like eating it NOW, but I'm in Singapore so cravings are no longer a dream and I can easily satisfy it tomorrow or whenever I feel like it. Yay :D 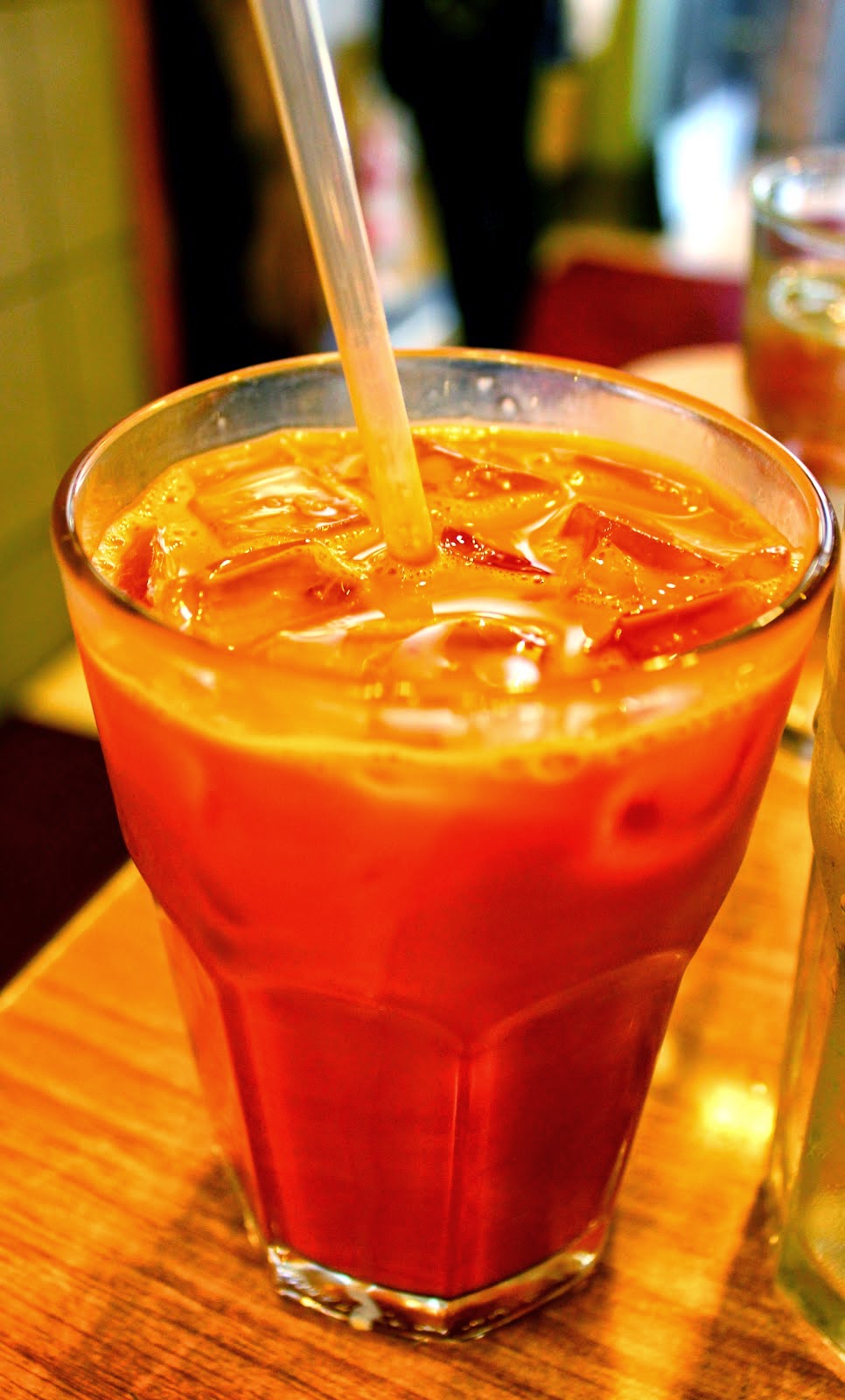 And, whats thai food without Thai milk tea! Yes, I think the milk tea is authentic so it was awesome [: Not very expensive too! (USD 2 bucks if I am not wrong)

Well, I would not say the food in this Thai shop is as authentic as the ones I have been used to eating in Singapore/Thailand. To survive in the States, some modification still needs to be done I guess. But overall, I think its not too bad (:

So after filling our stomach with yummy Asian food, we set off to check in! I love the room in HI [: It feels cosy and clean; which makes it good enough. And though we didn't get a room with a toilet, there was a sink and mirror in the room which makes it super convenient for us (brushing teeth, putting on make-up, etc). Did I mention that the location was awesome? You can practically walk everywhere, but who's going to walk when there's something as cool as the cable car in San Francisco right! :D

Next, we headed to the Ticket office to buy our cable car pass! Well, we bought the 3-days pass [: because we were staying for 3 days and it didn't make sense to buy other passes. 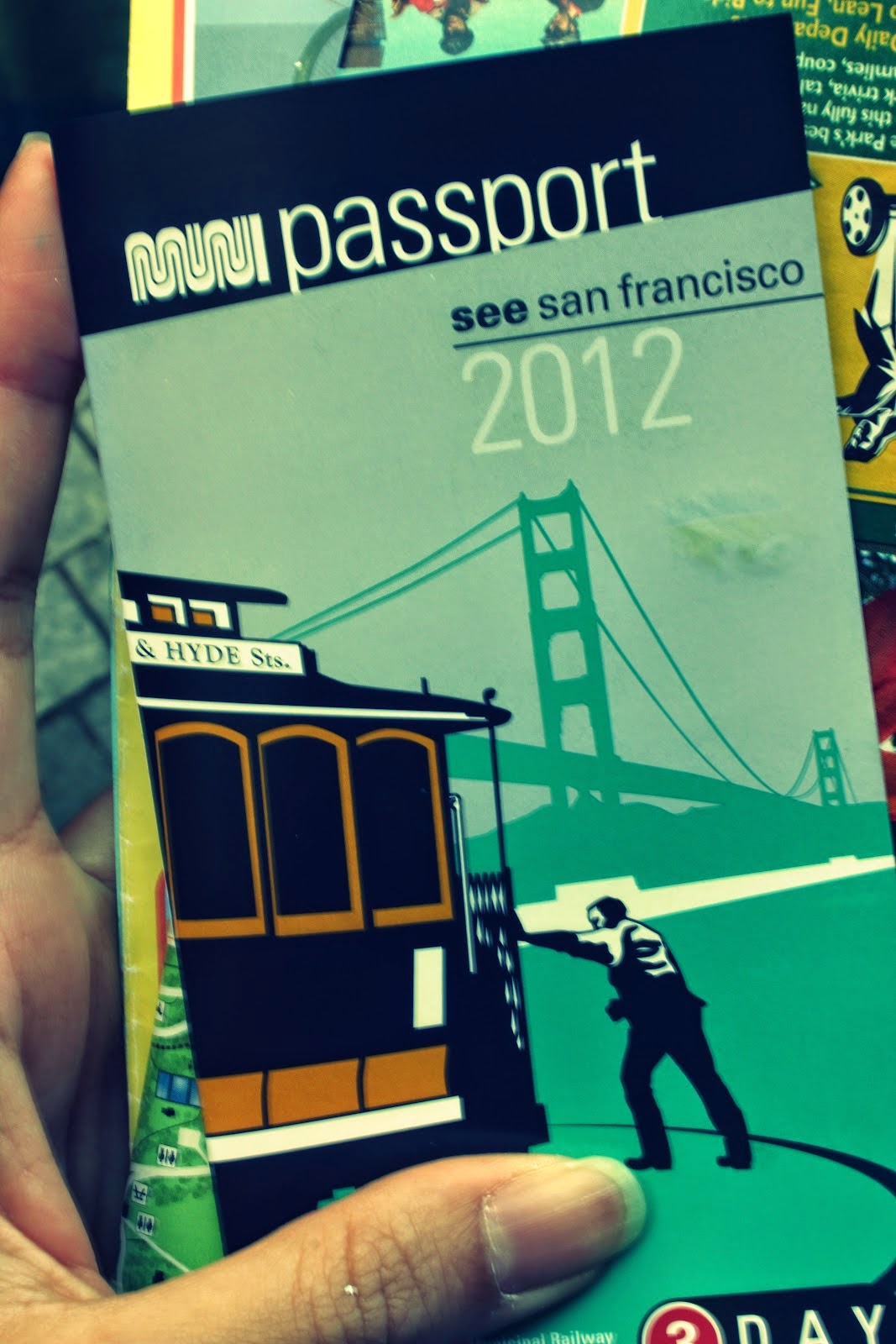 As you can see from the cover of the muni pass, the must-dos in SF are the Golden Gate Bridge and the cable car!

I think the public transport here is probably my favourite and most worth it! I'm biased because obviously I'm in love with the cable car.

Totally excited to try out the new ride. The queue at the first station was so long! Other than our first-time, we just  waited at the later stops so that we don't have to queue. Yes, the distance between the stops are actually of walkable distance.  But, this also means there were no seats for us as the cable car was loaded with people from the first station. 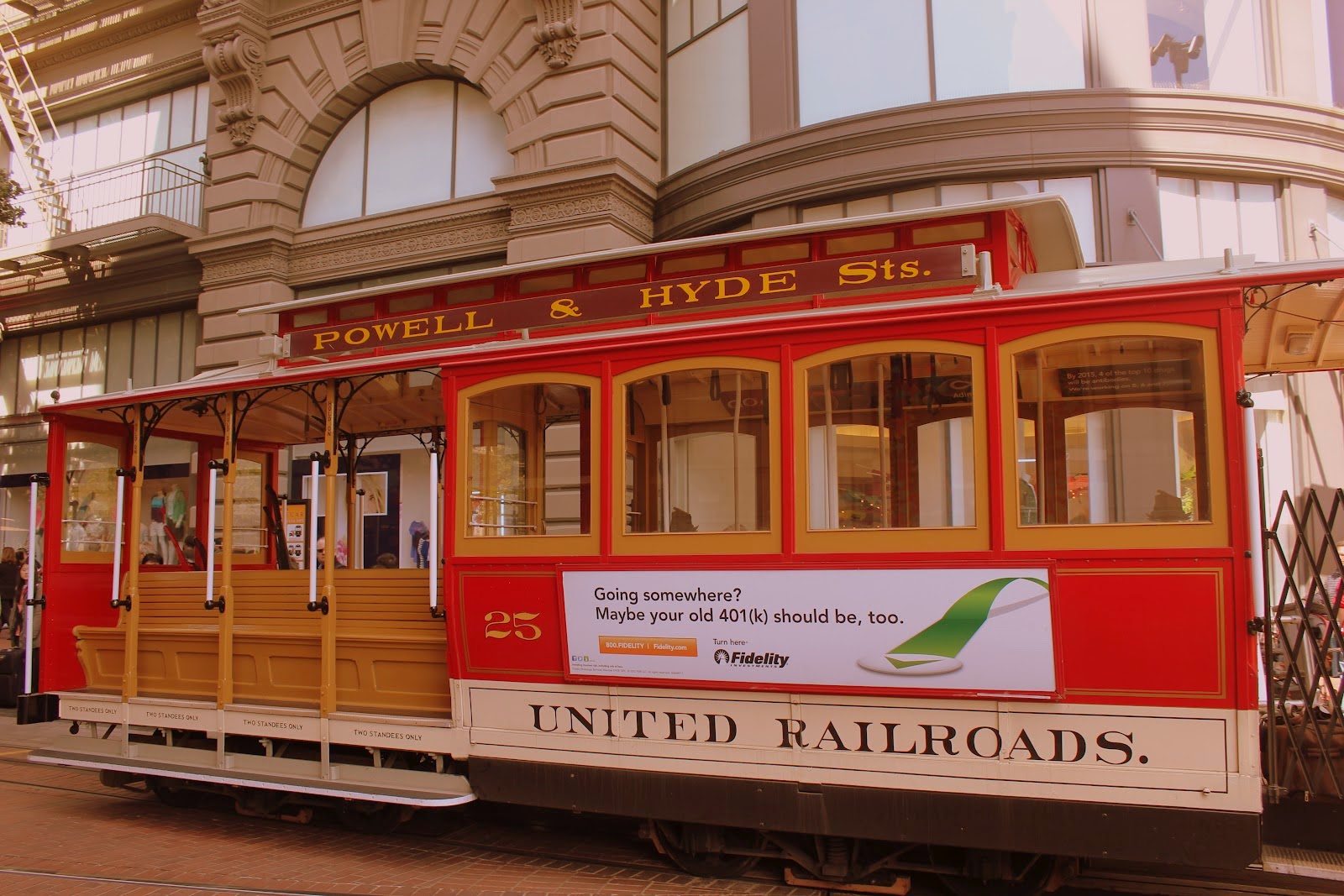 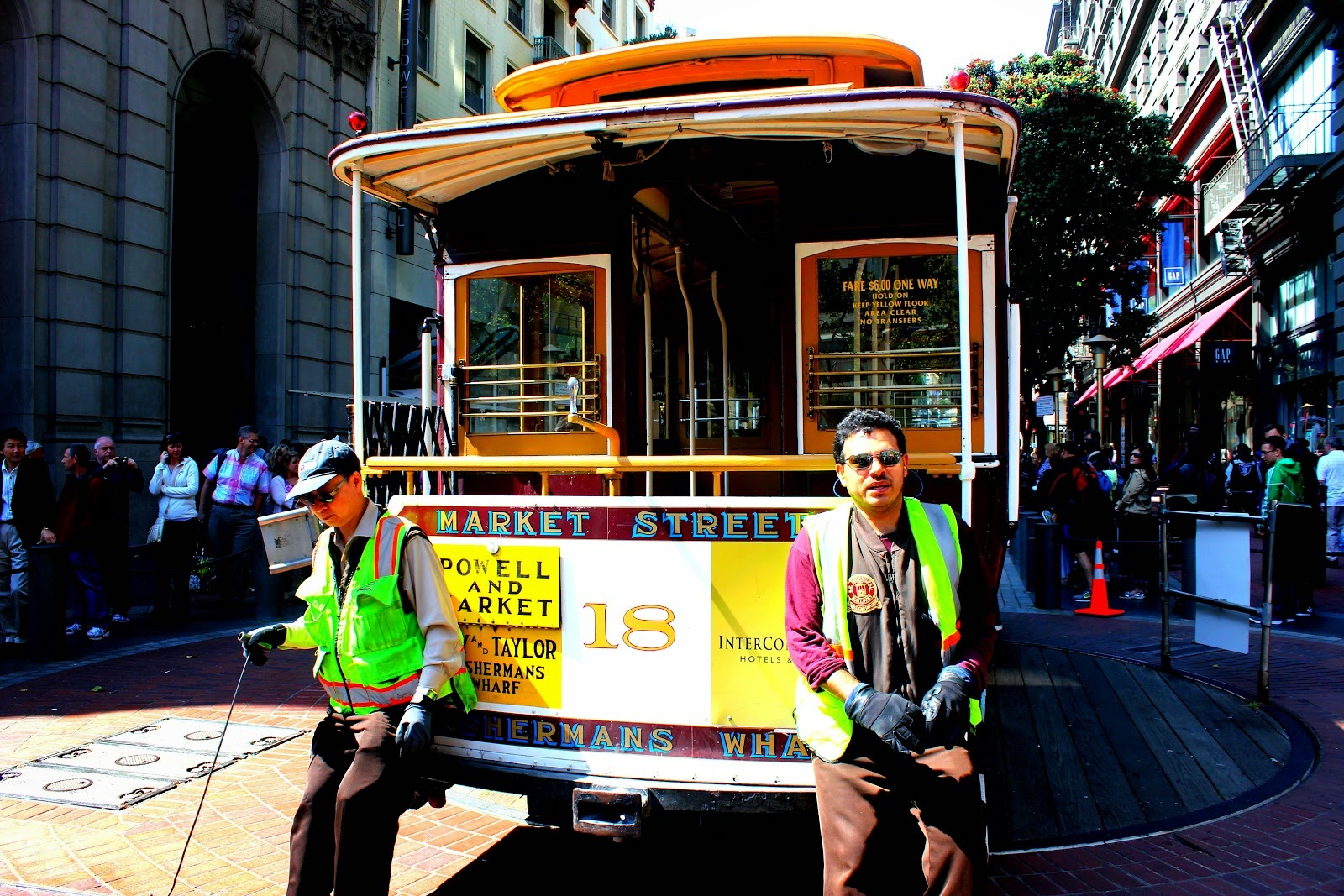 The cutest thing is probably that this cable car needs to be pushed manually at the end points. So old-school hahaha. And who knows, maybe the people pushing it are happy enjoying the many stares and looks they get? Like a movie star! So many people, so many cameras snapping shots at them.

We alighted at the stop for Chinatown as San Francisco is quite well-known for its Chinatown! Well, I would say there's nothing much here for us Chinese/Singaporeans. Heard that there are quite a few nice yummy restaurants though. Didn''t get the chance to try them though!

Some snapshots of Chinatown 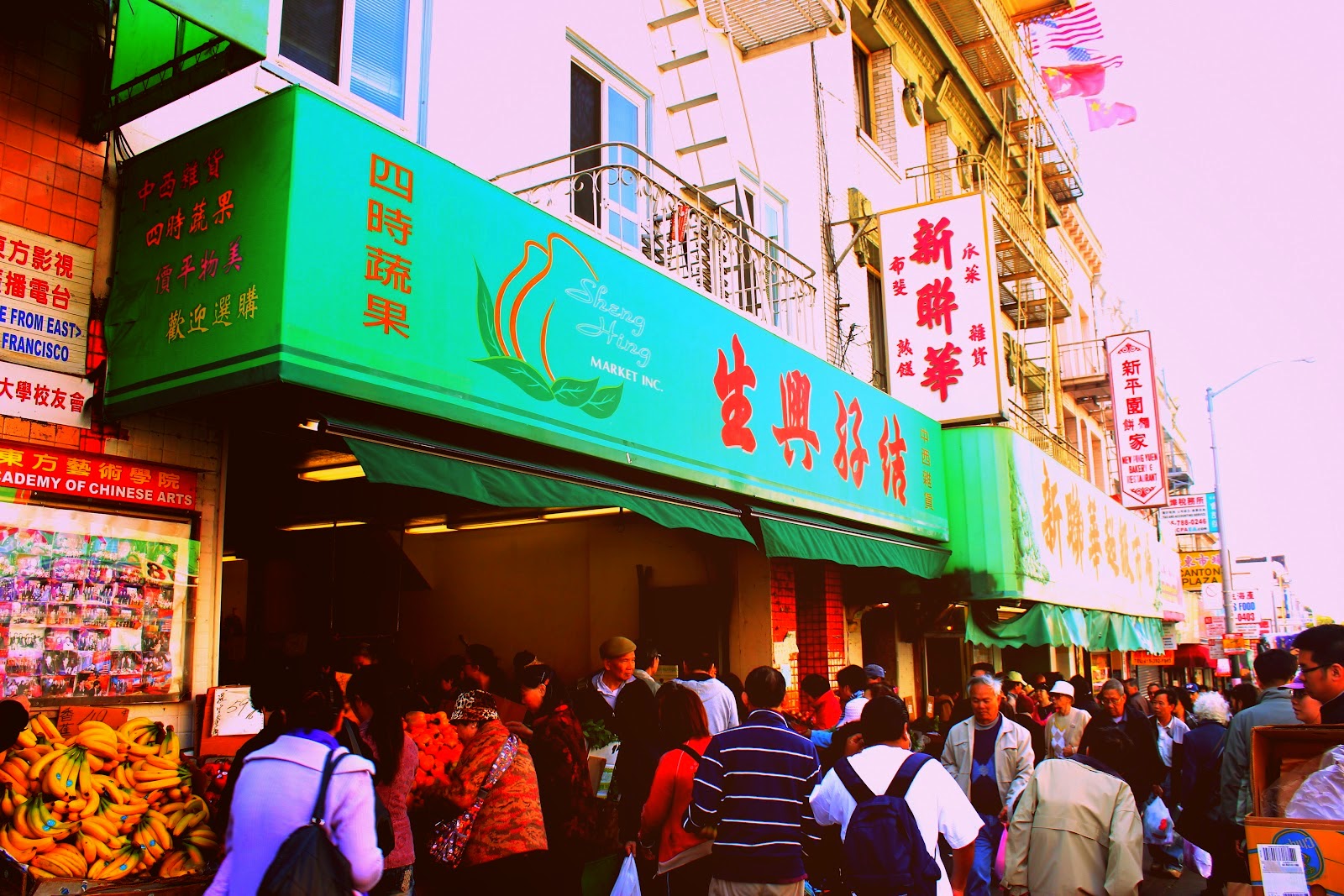 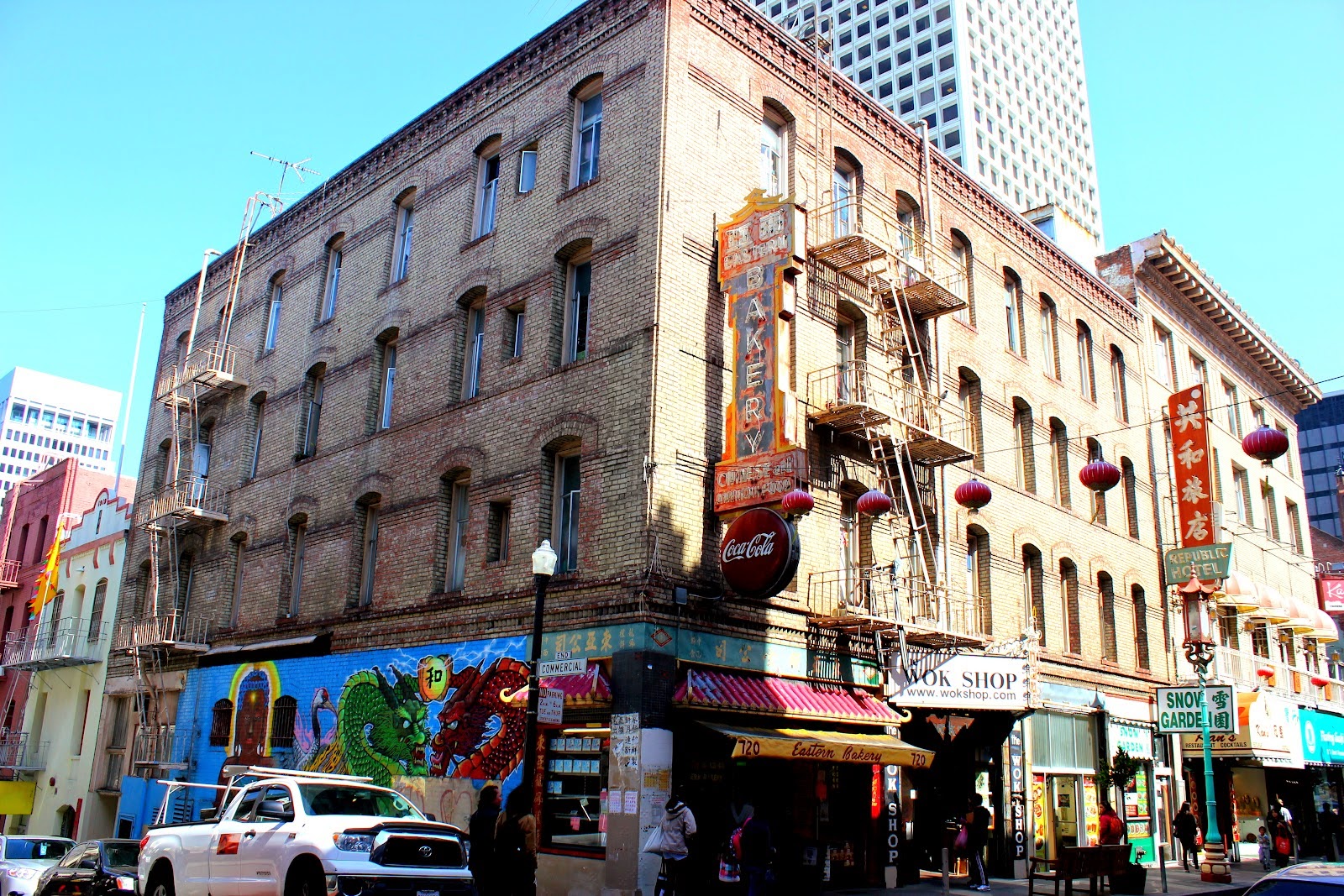 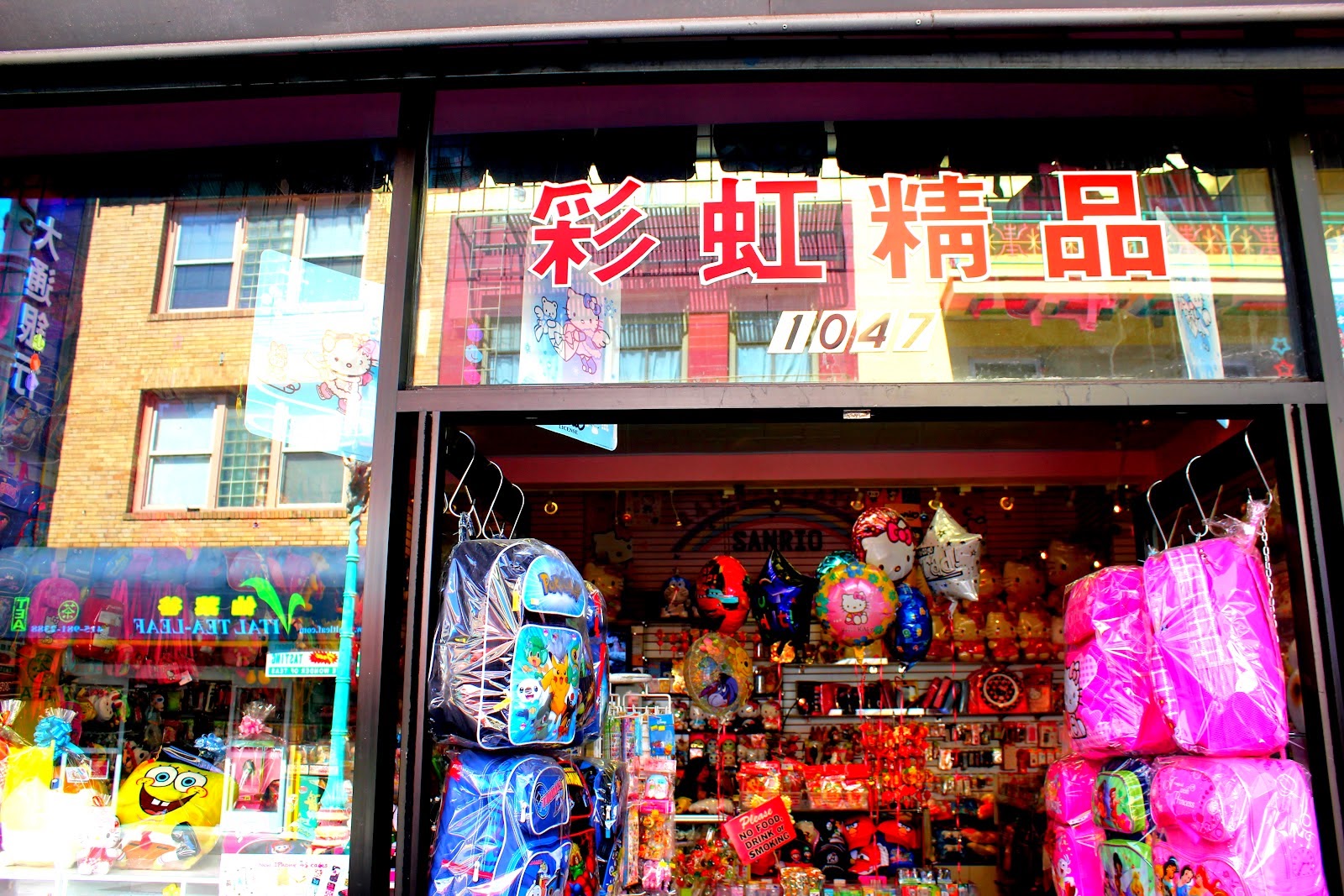 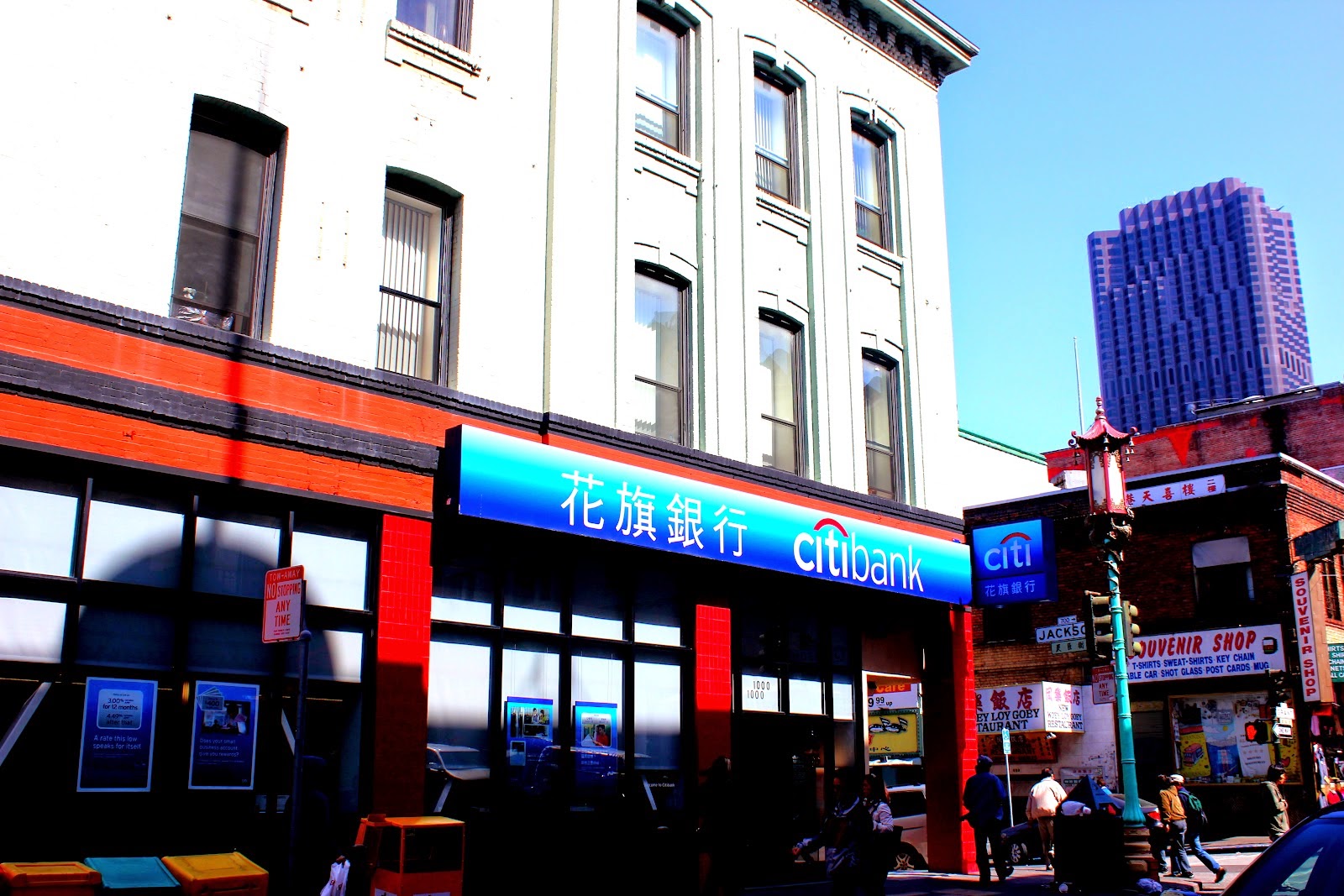 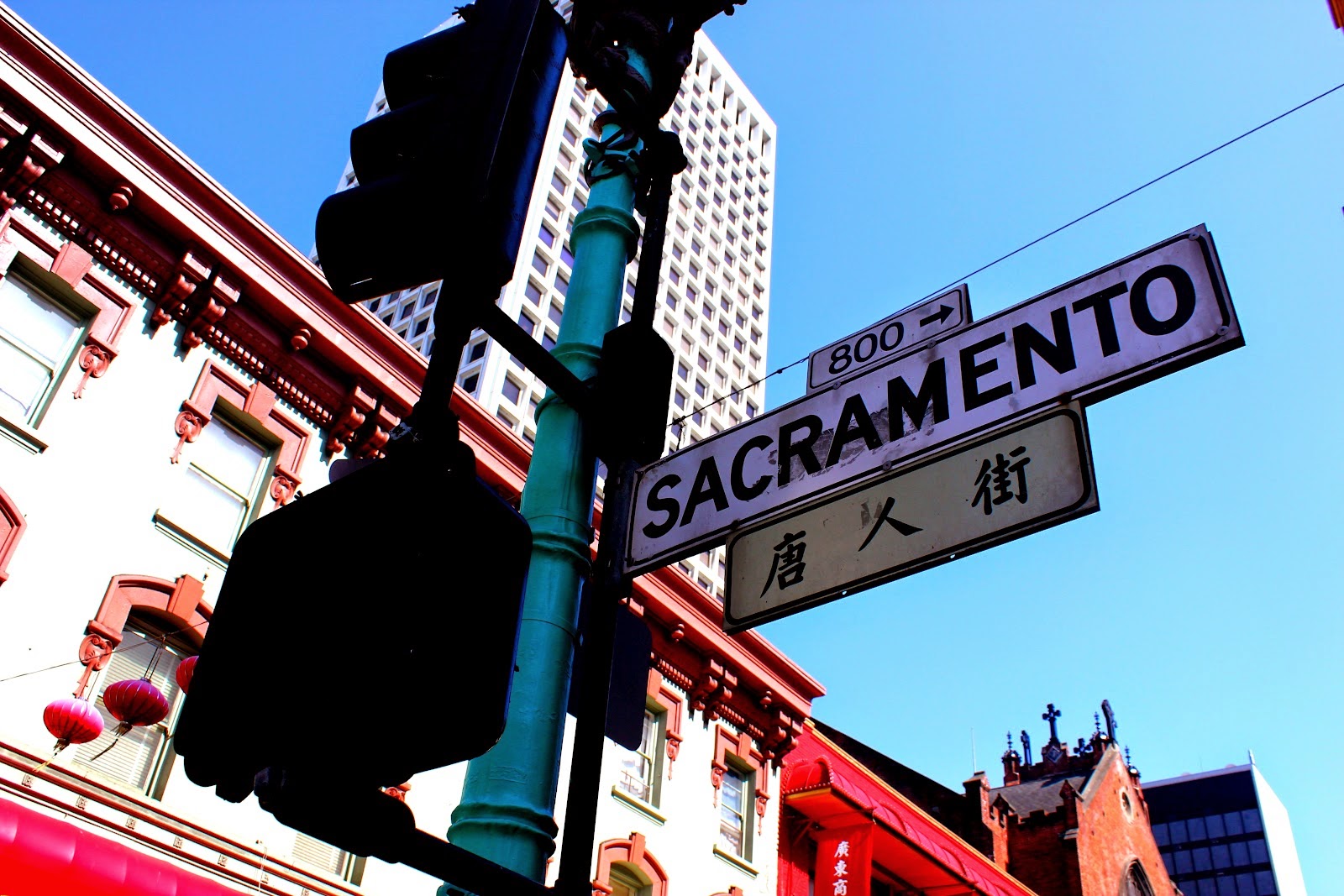 Okay after Chinatown, we strolled down to Union square. Yes, everything is so near to each other. 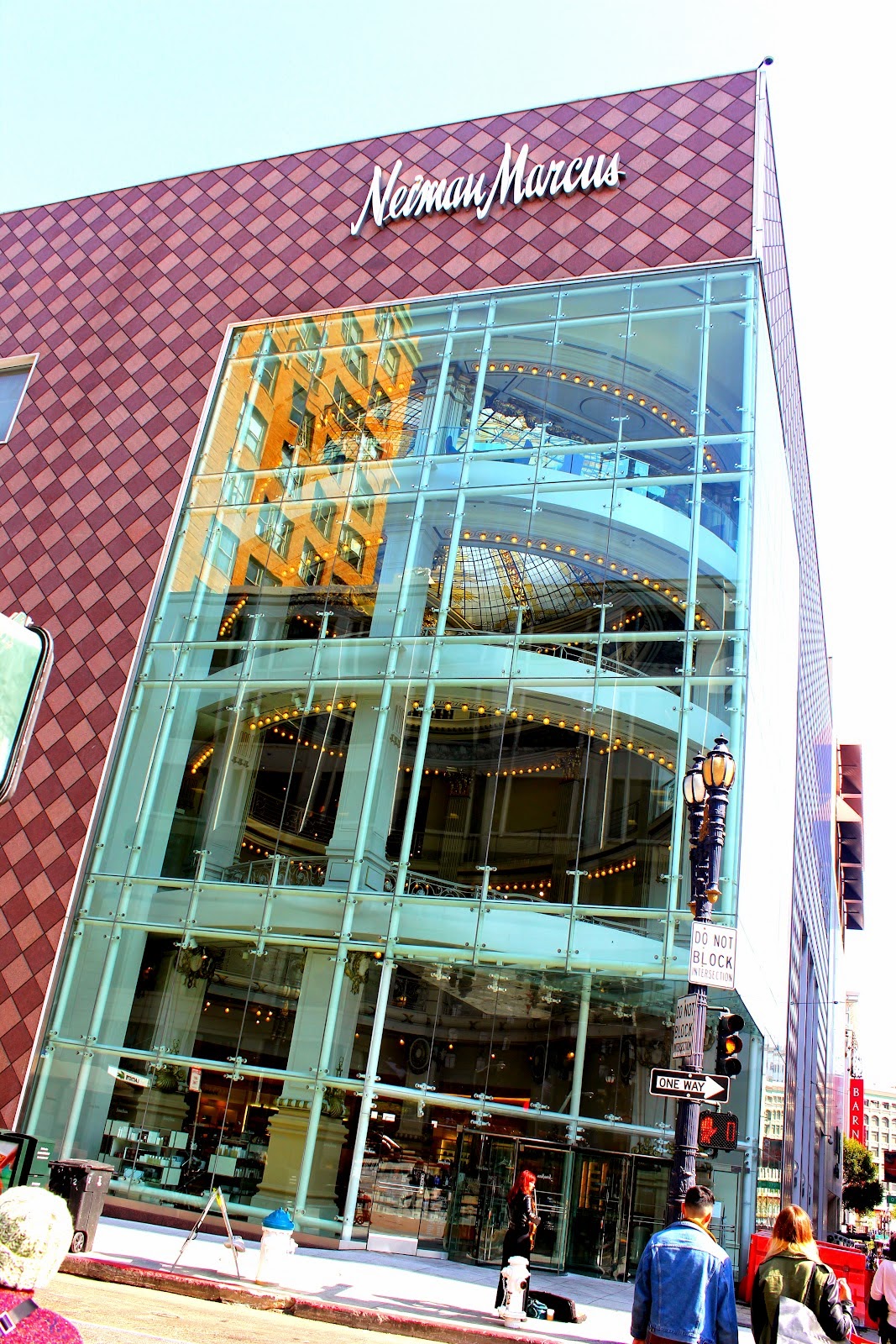 So with The Cheesecake Factory just opposite us, who can resist trying it right? 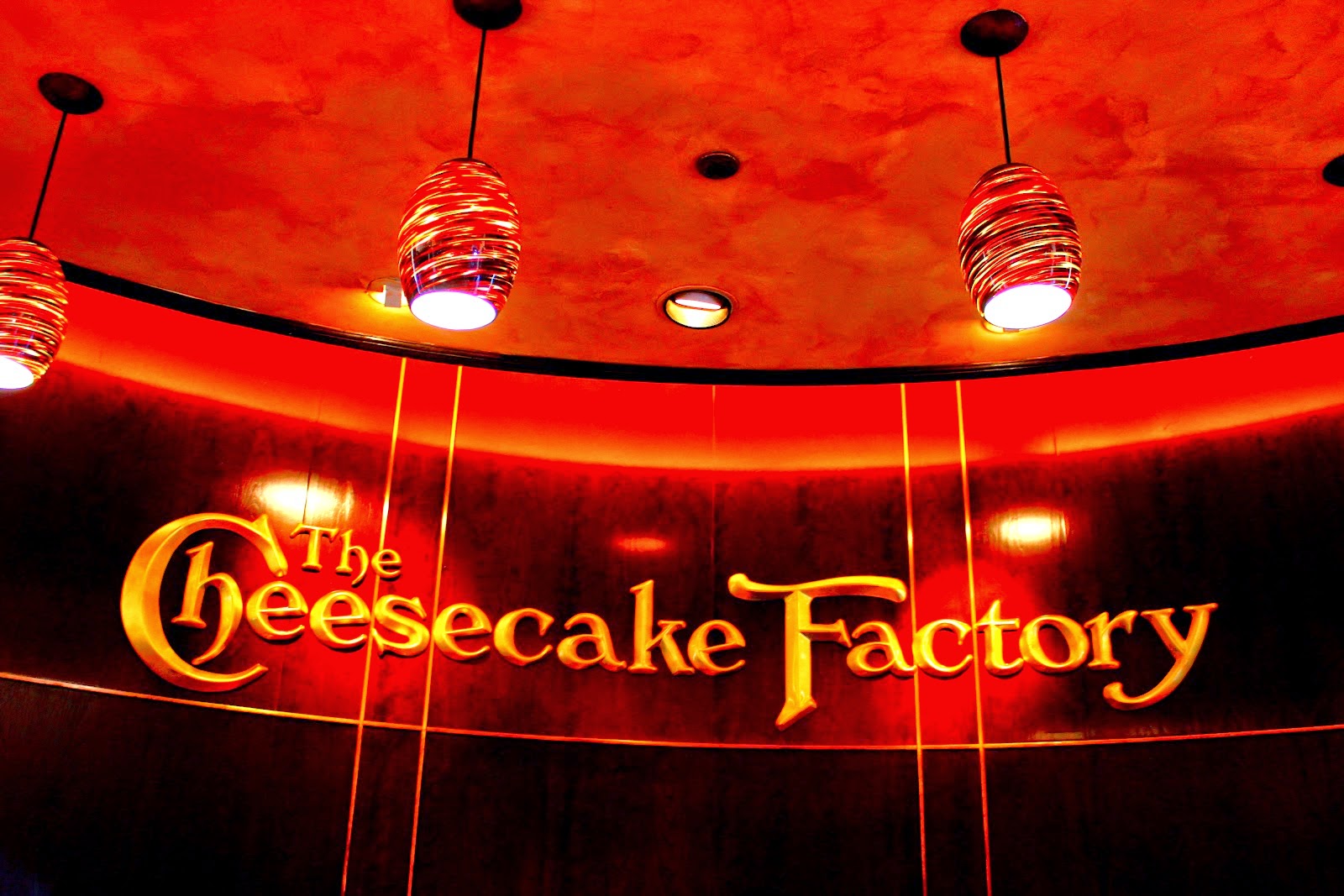 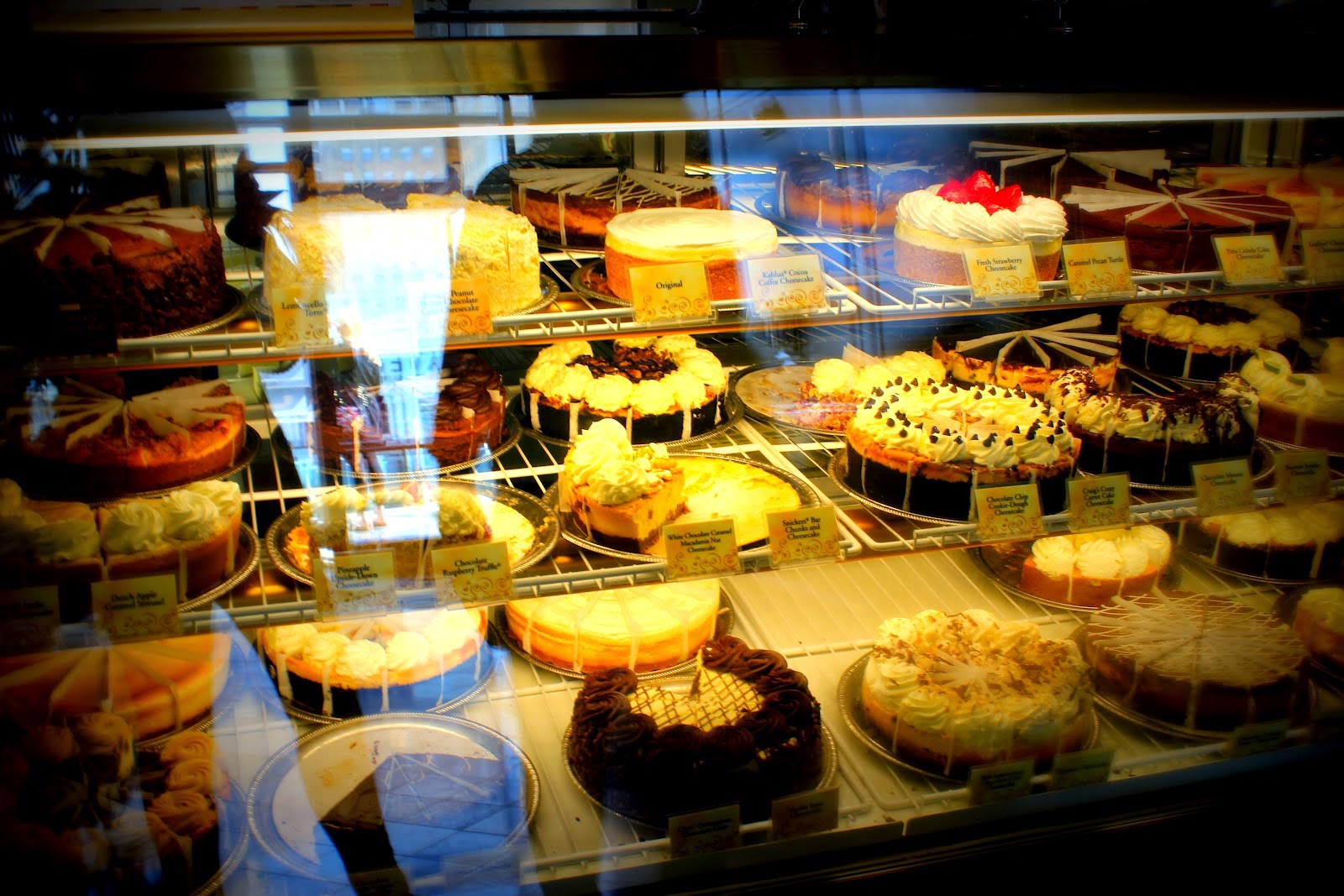 this is the most recommended! Hershley's Choco Cheesecake. 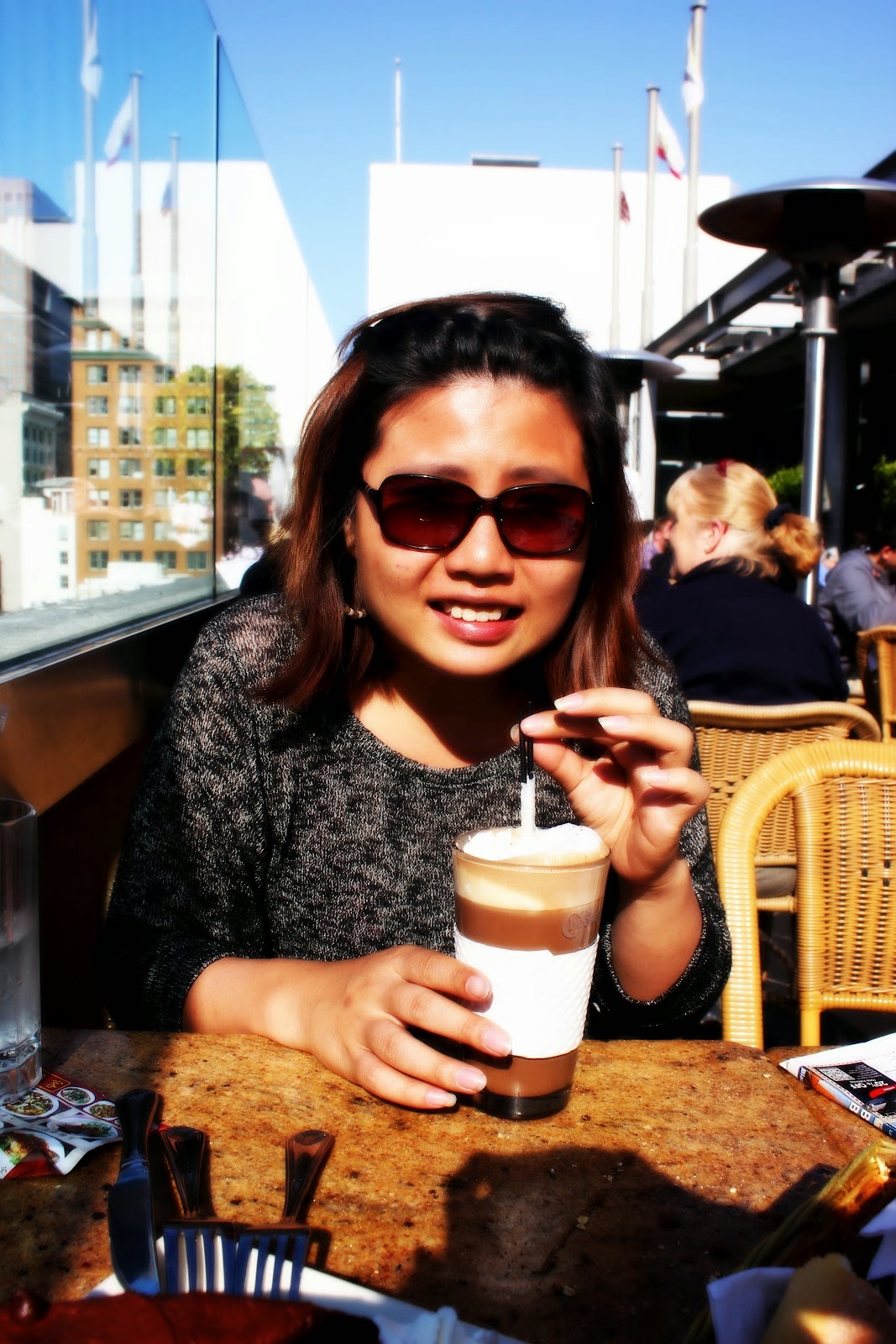 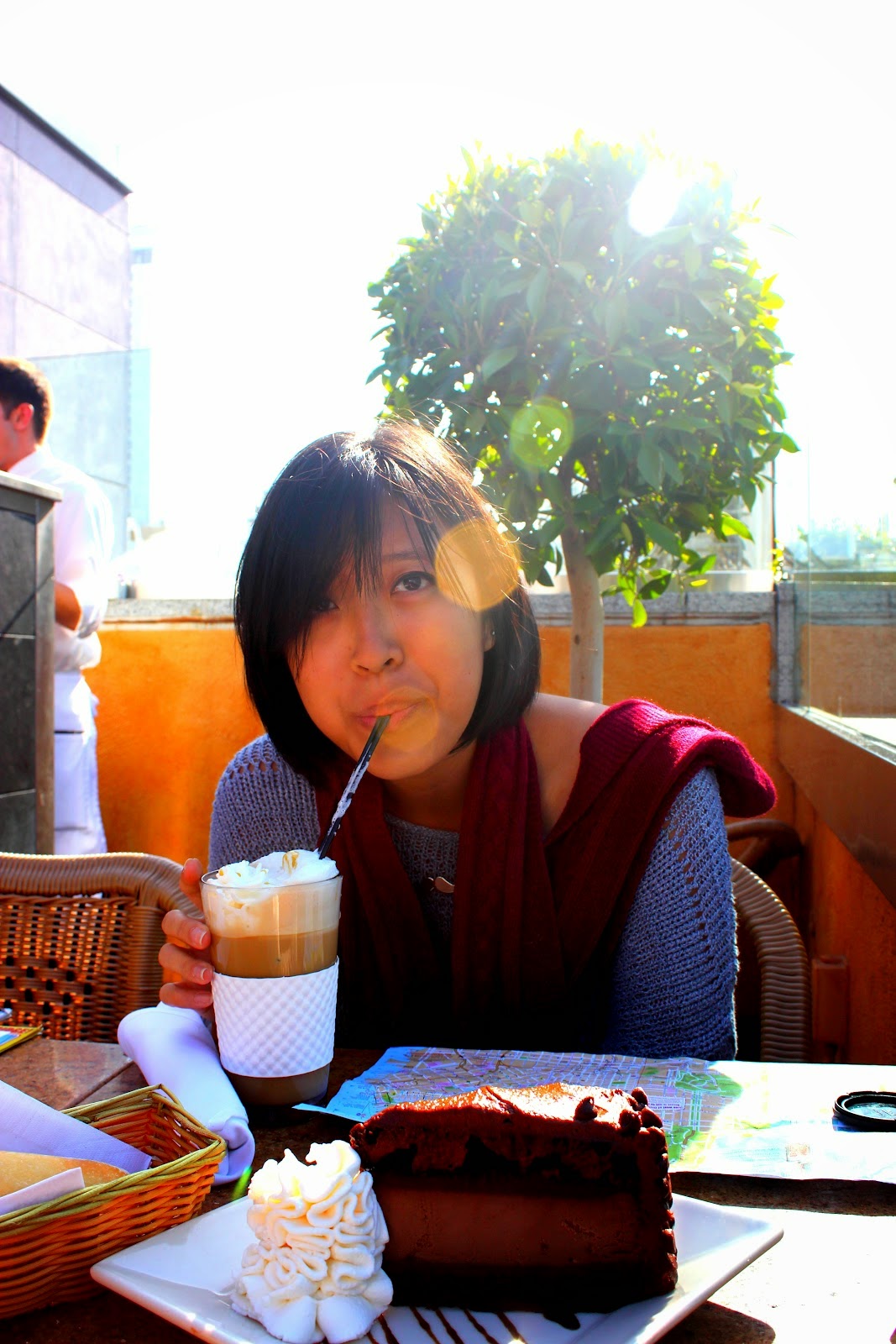 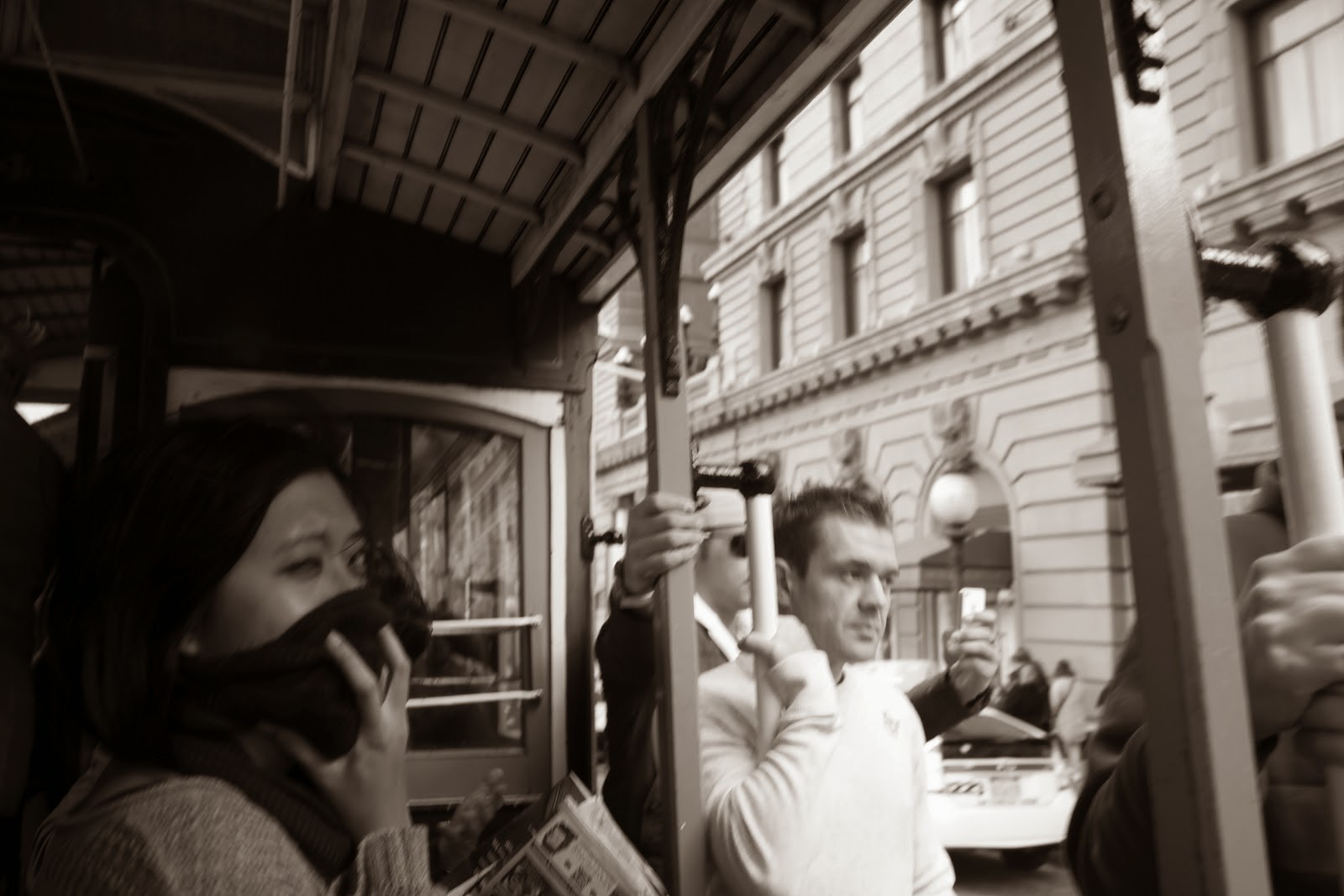 Yes, outdoor seat of the cable car. People can actually stand on the platform and while the thing moves. Fascinating right! Be warned, do not hold with one hand and use the other to snap photos. The driver might kick you down!

Its really cool to operate/drive the cable car. If only they give tourists a chance to try! 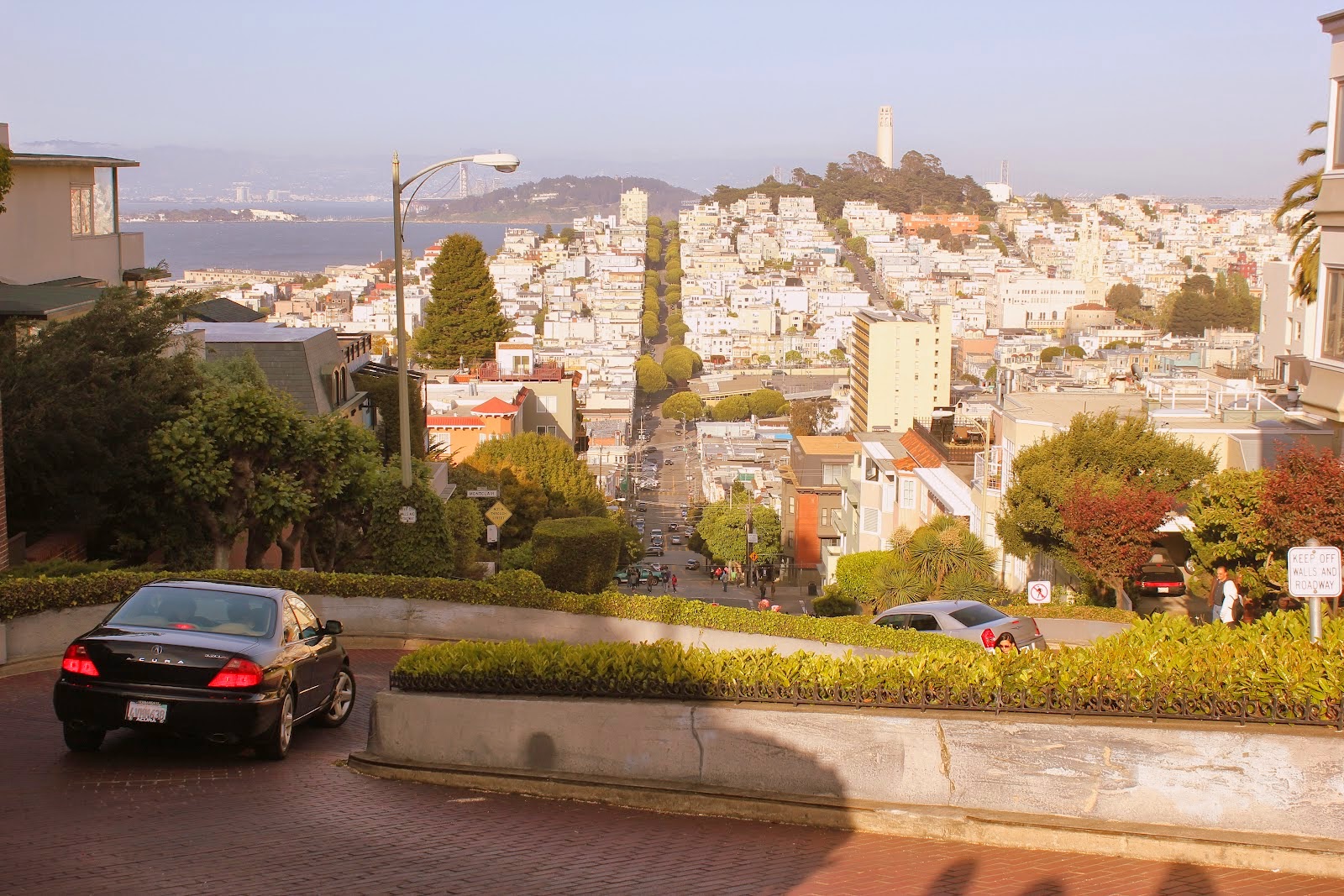 Here we are! at the world's crookedest street! Lombard street! Well, there were quite a lot of people snapping photos, posing with the road.

You get a good overview of San Francisco from here as well! 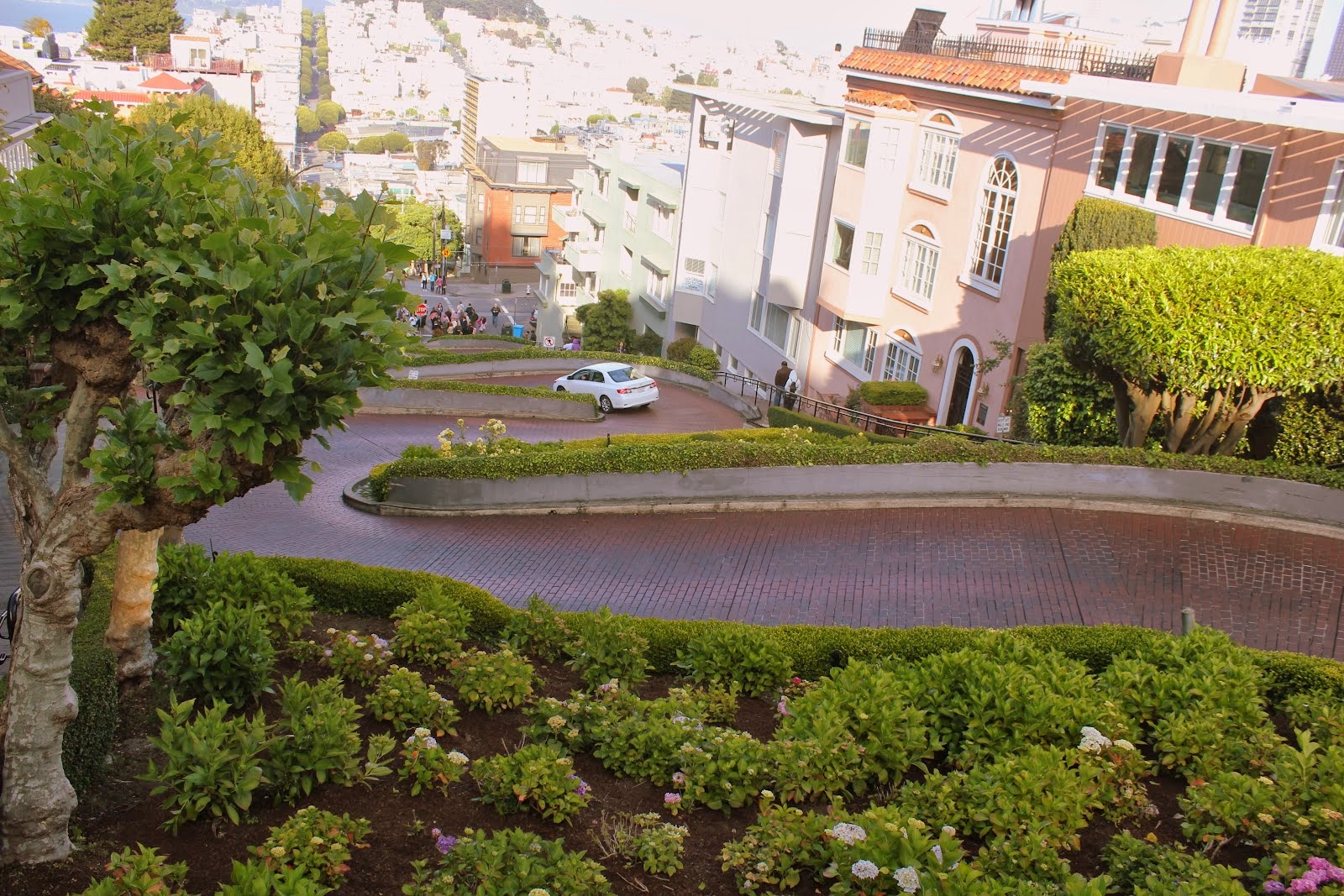 We went down to the Fisherman's Wharf. And as it was nearing night time, the wind was really strong. Everyone was shivering in coldness while waiting for the cable car. There was this roadside stall selling pullovers and jackets and their business was so good even though the things they sell weren't really value for money.

I also remember this lady we met on the cable car journey back! She's a really hip and friendly lady. I cannot imagine my mum travelling alone at her age. I forgot what I talked to her about but well, having random conversations with strangers is one of the things that make travelling so addictive and exciting.

That's pretty much my first day in San Francisco! If you have been reading this space, you would have realized that the pictures and style of writing is a bit different. I wrote about my journey in San Francisco right after I ended my travel in the states (almost 2 years ago) but only posting them now after some editing. Please also pardon the blurry photos!

Stay tune for my post on Day 2 in San Francisco!

If you have any enquiries, please feel free to drop us a comment below or email us at thumbsforfood@gmail.com.